Investors also consider several criteria for each selection, based on the advantages that country specifically holds. It could be geography, climate, culture, economy and finances, investment opportunities, safe haven status in the event of a global meltdown, or the state of the local real estate market.

Turkey is distinguished by its strategic location between Asia and Europe. Turkey is surrounded by seas and it is bordered by eight countries and six bodies of water. It is surrounded by water on three sides and by high mountains.

Turkey has various economic activities. Turkey depends on industry, agriculture, trade and minerals in its economy. Moreover, tourism and medical tourism sectors flourish day after day as a result of the tourism and economic boom in the country. Turkey is experiencing a state of economic progress that will drive a comprehensive growth of investment in the coming years.

The most suitable cities for real estate investment in Turkey

Global cities experienced only modest growth in home values from April through June, as much of the world faced some form of economic lockdown. While, three Turkish cities witnessed astronomical price growth that led the entire global index, Mansion Global reported.

House prices in 150 urban centers rose by an average of 3.4% in the second quarter of 2020 compared to the same period last year, according to Knight Frank’s Global Residential Cities Index, published in October. While it marked a very slight downtick from the 3.6% annual growth recorded in the first three months of the year, the massive economic disruption caused by the pandemic appears not to have had an immediate impact on city home prices.

Indeed, there were still pockets of extreme growth particularly in Turkey, where astronomical price growth in three cities led the entire index. The Turkish port Izmir, the country’s third most populous city, saw home prices shoot up 28.1% in the year through June, followed by Ankara, the capital, with 26.4% growth and Istanbul, with 20.2% growth year-over-year.

Foreign residential sales showed a rapid increase in the last year due to the high exchange rate and legislative amendments that eased the minimum requirements for acquiring Turkish citizenship, which has led investors from all over the world to benefit from this opportunity and acquire residential property in the country.

Under regulations introduced on Sept. 19, 2018, foreigners who own real estate in Turkey worth a minimum of $250,000 – down from $1 million – are eligible for Turkish citizenship.

According to the Interior Ministry's General Directorate of Population and Citizenship Affairs, some 2,611 foreign buyers became Turkish citizens a year after the amendments were introduced.

Foreigners were first able to buy property in 2001, and since then Turkish authorities have continually revised and simplified the process to attract investment in the housing market from overseas. Buying a house or owning a property in Turkey can be completed in just one day.

Turkey offers a golden opportunity for settlement and investment, offering a distinguished opportunity to obtain Turkish citizenship for the family during a record period. Akarkom team of real estate consultants is ready to help you choose the most suitable properties according to your budget and requirements from within a bouquet of carefully selected villas, apartments and shops.

As a US territory, Puerto Rico enjoys cultural, economic, and financial integration with the US proper. Most of the population speaks English, and you will have very little difficulty navigating the highway system.

Puerto Rico is an island country, with the Atlantic Ocean to the north, and the Caribbean Sea to the south. It is thus surrounded by some of the most beautiful tropical beaches in the world.

Panama has become a haven for expatriates from all over the world, but particularly from the US. Like Puerto Rico, it’s located in the tropics; it has beaches on both the Caribbean Sea and the Pacific Ocean.

It is home to the Panama Canal, making it some of the most strategically located real estate in the world.

Location is important to Panama on other fronts as well. Since the country joins North and South America, it represents a bridge between two major continents. That also makes it a link between the United States and South America. The country has been virtually safe from foreign invasion by virtue of this location.

Asia has been on the forefront of global economic growth for at least the past 20 years. Singapore has benefited from this development in that it represents the gateway to the Asian continent.

A former British colony, Singapore has inherited much of the highly successful British system of law, economics, trade, and finances. For this reason, the country is rapidly becoming the banker nation to much in the Asian market.

Singapore has the fourth highest per capita gross domestic product in the world, and is rapidly becoming one of the leading financial centers in the world, on a par with New York, London, and Tokyo.

Wealthy Asians, and Asian companies, are managing their finances through Singapore banks and brokerage firms. At the same time, non-Asian firms are increasingly doing business in Singapore as the best way to get a foothold in the Asian market.

Costa Rica is a safe, stable country with a growing economy and a government that is encouraging foreign investment. It enjoys many of the same advantages of Panama, except that it is not as wealthy, and therefore the cost of living is a bit lower.

You do not have to be a citizen of Costa Rica to own property there, and you will be entitled to the same constitutional protections as a local citizen. It is also not necessary to purchase property through a trust or any other type of legal or corporate shell.

Uruguay is a small but stable country, attracting an increasing number of foreigners and foreign money. In fact, the country is rapidly becoming the international banking center of South America.

Uruguay welcomes foreign investment money, and treats foreigners in much the same way that it does its own citizens. There are no restrictions on foreign ownership of land, nor are the any exchange controls or currency restrictions.

Malaysia enjoys at least some of the advantages that Singapore is known for. In fact, geographically it is the peninsula upon which Singapore is mounted. It enjoys a tropical climate, and is surrounded by beaches on both the east and west coasts.

And again like Singapore, English is widely spoken in Malaysia, and Western banking customs are typical.

Malaysia’s big advantage over Singapore though is cost. Both the cost of living and real estate prices are significantly lower than what they are in more prosperous Singapore.

As a supplier nation (oil, food, raw materials) it is less subject to the economic ups and downs than the US and Europe are.

This point is not lost on wealthy internationals, particularly the Chinese. They are flocking to Canada, particularly to the Vancouver area, seeing it as a safe haven from potential troubles at home.

Though it will be considerably more difficult to earn a living in Mexico than it would be in Canada, Mexico still offers similar advantages to Canada. It’s a bicoastal nation, fronting on both Pacific Ocean in the Caribbean Sea (actually the Gulf of Mexico for the most part).

You can buy real estate in Mexico without being a citizen or qualifying as a resident. You must do this through what’s called a fideicomiso, which is something like a real estate trust that allows foreigners to own property near either the country’s beaches or borders.

Real estate prices in Mexico run the gamut. In some areas property values are comparable to the US, particularly in popular beachfront locations. But in more remote areas, property is relatively inexpensive.

Australia has certain similarities to Canada from a real estate investment standpoint. Everyone speaks English there, and laws and customs are very similar to what they are throughout the English-speaking world.

The country offers a full range of property types, from high-priced urban locations, to inexpensive rural areas. And the entire country surrounded by some of the best beaches in the world.

Up until the property crash in 2007, Spain – and its real estate – was booming. It wasn’t merely that the world had suddenly discovered Spain as a good place to own property, but also because the country was making tremendous economic strides. The resulting building boom was evident nationwide, the result of an economic boom that had spread across nearly every industry in the country.

While Spain has seen a major decline in its economic fortunes since the meltdown, many of the basic reasons why you would invest in real estate there still exist. It has some of the finest – and the most extensive – beachfront property in Europe. And it has become a haven for investors throughout Europe.

UAE is a tax-friendly country. The country offers a higher rental yield, thus making you reap the maximum benefits of your investment. As there is no income tax, you also don’t end up having to pay tax on accumulated rent. If investing in residential units is your goal, you can choose from Dubai’s wide range of properties.

With a healthy economy and a variety of natural resources, Indonesia is one of the best countries for real estate investment. It has a good investment climate so if you invest there; chances are high that you won’t feel disappointed! Another reason that you can consider buying property in Indonesia is because of its profitable domestic market. It is a densely populated country where you can find various consumers willing to take a property on rent. As an overseas landlord, you can give it on rent and enjoy more stability and better profits as the rental yield grows. While it is still not easy for foreigners to buy a property outright in Indonesia, leasehold arrangements are common. In addition, the government has also been contemplating a proposed bill to introduce overseas investments in property.

With steady rental yields, Cyprus has become one of the most significant countries for real estate investment. You can enjoy the benefits of a stable income that would cover your running costs, mortgage payments and other monetary problems that may pop up while buying a property. The property sales prices are also pretty decent, so investing in Cyprus’ real estate market can be a win-win situation for you!

When it comes to making a property investment in one of the European countries, Germany can be your safest bet. Having attained a state of financial stability, it has established itself as one the leading financial forces in the world, so you wouldn’t be in a loss upon investing there. Another factor that makes Germany one of the safest countries for real estate investment is its low cost of living and an effective income tax rate that you can capitalize on.

The French real estate market is one of the most popular areas for long-term ROI in Europe. It allows you to make in-country financing – something that not all countries can claim to offer! The interest rates for mortgages are quite low while the loan-to-value is as high as 85% which means that you can opt for more refinance options. As far as taxation is concerned, the rental income tax is lower than the other European countries.

Akarkom International offers a various opportunities, including apartments and shops with profitable investment returns, with rental guarantee, and we also have attractive offers and various packages for customers looking to obtain Turkish citizenship. As per there are the consequences of the rising of the inflation on the Turkish economy , the rise... Advantages of buying an apartment in Bagcilar 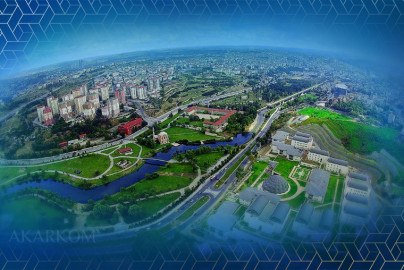